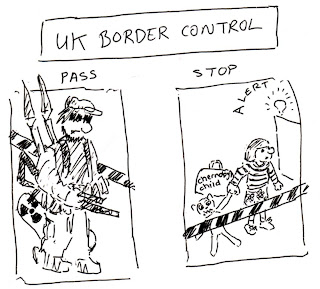 If you want new nuclear build the last thing you need is pesky charities bringing children over from Chernobyl. This reminds the carefully groomed UK that nuclear power leads to accident and incident.

The UK Border Agency is stepping up harassment of Chernobyl Children's charities - bizarre given the recent news stories about the failings of Border Control. Radiation Free Lakeland have written to Tim Farron MP to ask that this tactic of harassment is stopped.

At the conference of the European Chernobyl Network in Germany at the weekend, attendees were horrified to hear about the treatment of charities bringing children over from Chernobyl.
Most speakers stated the reason was the UK Government's strong pro-nuclear
stance: Chernobyl children and the snowballing effects of radiation through the generations are not a good advertisement for the development of nuclear power.

http://www.guardian.co.uk/politics/2011/nov/07/border-control-row-gulf-theresa-may
Posted by marianne birkby at 09:06