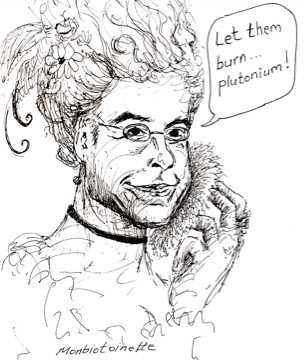 “People always assume that if someone doesn’t know something, it’s because they haven’t paid attention or haven’t yet figured it out. But ignorance also comes from people literally suppressing truth—or drowning it out—or trying to make it so confusing that people stop caring about what’s true and what’s not.” Robert Proctor
http://en.wikipedia.org/wiki/Agnotology

The nuclear agenda relies on agnotology , examples include the proposal to build new nuclear plants at the two greenfield sites in Cumbria, Kirksanton and Braystones. This much publicised move diverted attention, energy and local anger away from the real and insane agenda which is to build "up to nine" new nuclear reactors at Sellafield.
http://www.whitehavennews.co.uk/news/reaction-to-sellafield-nuclear-new-build-1.770027?referrerPath=1.137755

George Monbiot's oh so persuasive and persistent (!) proposal to 'let them burn plutonium' is another example of agnotology.
http://www.robedwards.com/2012/01/plutonium-reactor-plan-rejected.html

Meanwhile the plan to bury high level nuclear wastes in Cumbria in order to make yet more high level wastes continues while the Guardianistas arguments churn having taken their cue from "the leading environmental activist and writer" (whose time has come?)
Posted by marianne birkby at 05:26