Use No 43. Unlikely Heroes: Super Eddie 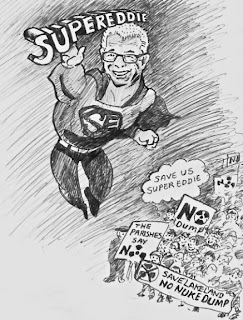 Perhaps the most unlikely of Superheroes? Eddie Martin as conservative Leader of Cumbria County Council was a staunch and most loyal supporter of the nuclear industry, so it must have come as rather a nasty shock to the nuclear apparatchiks in government when Super Eddie listened to the majority of his Parish Councils and to the overwhelming evidence AGAINST going on with "steps towards geological disposal" i.e. dumping nuclear reactor cores under Cumbria. Earlier this year, Cumbria county council woke up to the reality behind decades of government propaganda and nuclear industry spin and rejected a plan to bury hot radioactive waste under England’s Lake District. Eddie Martin's Full Speech to Cabinet "Like a two year old, radioactive waste can get into everything: water, soil, plants and animals. One way to control it is to trap it in ceramic-type materials so that it can’t escape into the environment. Hopefully, by the time the ceramic breaks down, the radioactivity will have decayed and will no longer pose a threat. But science is not infallible. What is deemed scientifically accurate and undeniable today may not be so in 100 or 1000 years time…" http://mariannewildart.wordpress.com/2013/02/06/eddie-martins-speech-to-cabinet-on-30th-january/
Posted by marianne birkby at 12:32