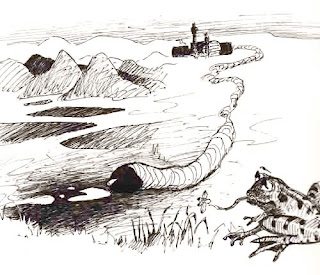 Use 1
How to use freshwater resources.
Today 4 million gallons of water were abstracted from Britain's favourite view - Wastwater- to cool nuclear wastes at Sellafield.. the same amount of freshwater used by three cumbrian towns daily. The high level nuke waste in Cumbria includes spent fuel, sent (by boat with military escorts) from Japan and reprocessed at Sellafield. Reprocessing is banned in the USA as the dirty old process makes already dangerous high level wastes even more dangerous.
Tomorrow 4 million gallons of freshwater will be used to cool the wastes at Sellafield ....
http://www.tennerfilms.com/index.php/guest-blog/94-feb-2010
Today in Japan
"The earthquake appears to be causing the greatest problems for the Fukushima Daiichi reactors, although several reactors at both sites were affected by the earthquake. Specifically , Fukushima 1-2 has lost back up power (fossil fuel ) and necessary cooling capacity (water) ".
http://www.stratfor.com/analysis/20110312-red-alert-nuclear-meltdown-quake-damaged-japanese-plant?utm_source=redalert&utm_medium=email&utm_campaign=110312%284%29&utm_content=readmore&elq=464c899d2e6847429591aaa8baff429f
Posted by marianne birkby at 09:03

Email ThisBlogThis!Share to TwitterShare to FacebookShare to Pinterest
Labels: Water