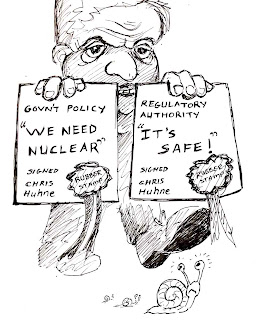 Use no. 15
Rubber Stamps
We were at the High Court in Leeds last Thursday to support Rory Walker in his challenge to the Government's insane push for cancer factories. New nuclear build and radiation linked diseases are terrible twins.
Judge McCombe refused to allow the case to go ahead because in his esteemed opinion it is perfectly OK for the Secretary of State, Chris Huhne to be both cheerleader for new build and the person authorised to rubber stamp the *safety. Following new "fast tracking" of the planning system at no other point will the safety of new reactors be under scrutiny.
Rory was granted legal aid - but the Legal Services Commission has asked for £16,250 towards court costs if this case does eventually go ahead to "prove that there is public support for his case" This money was raised in a short space of time from ordinary people - not big NGOs - but the Judge had the brass neck to say that health detriment from new build was "of no public interest." He also looked over towards us in the public gallery and said that the case being brought with legal aid was "unattractive" Hmmm.
Rory's legal team are considering whether to recommend an appeal against the judge's decision.
http://www.irwinmitchell.com/search/pages/newsviewer.aspx?f=Government-Faces-High-Court-Challenge-On-Nuclear-Power-Plans.aspx
*safety - The Secretary of State's defence lawyer declared on Thursday in court that the "best evidence suggests that there is no increase in cancers near nuclear power stations - that is the end of it" I suppose the "best evidence" is the recently published government COMARE report which did not include Sellafield ! And the real evidence of increased childhood leukemias (every week in the Cumbrian papers another "story" of another child's "brave fight") and other radiation linked diseases is nothing more than an inconvenient truth to be airbrushed out of history.
http://northern-indymedia.org/articles/1319
Posted by marianne birkby at 13:20