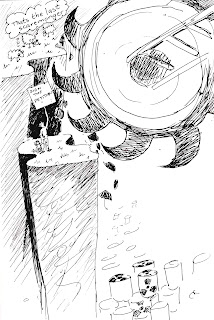 Radiation Free Lakeland delivered a 1520 signature petition to Cumbria County Council offices in Kendal on Monday 5th September. The petition calls on Cumbria County Council and Copeland and Allerdale Borough Councils to halt the Managing Radioactive Wastes Safely process by their withdrawal. The government’s MRWS process has one agenda - “steps towards geological disposal” which means a newly mined area (or two or three) filled with high level radioactive wastes – in a hole(s) bigger than Lake Windermere and as deep as the Eiffel Tower. (see Refs below)

Despite the implications for Cumbria and its neighbours this petition has received almost no mainstream local or national press coverage apart from a Radio Cumbria interview on the morning of the hand over, where RAFL was accused repeatedly of “scaremongering” by the Leader of Copeland Borough Council. This set the tone of the interview which was topped off by the presenter (having taken his cue) shouting at volunteer Marianne Birkby. MRWS employ the services of a PR company to write speeches, letters and advise on “Crisis and Issues PR.” The PR Company is owned by Chair of Cumbria Tourism Eric Robson and Paul Gardner former political speech writer. Other 'facilitators' are also employed, costing the taxpayer £1M+ yearly Positive press coverage is one of the aims with adverts and multi page inserts into local press.

Many of the signatures were collected at Gosforth Show where the MRWS Partnership also had a stall. In 1995 Longlands Farm at Gosforth was chosen as the most likely location for an intermediate level waste dump. Following a public inquiry, the Nirex Inquiry Decision was that the site should be sought elsewhere - well away from the Irish Sea. In
2011 the vast majority of people at Gosforth Show who visited the Radiation Free Lakeland stall were keen to sign the petition and understood that Cumbria’s leaky geology is not safe, dry or remote enough from human habitation to keep high level radioactive wastes isolated into eternity.

A covering letter has been sent to Cumbria County Councillors and Allerdale and Copeland Borough Councillors. The full text of the letter
is below:

We will be delivering a petition of 1520 signatures to CCC on Monday 5th September. The petition calls on Cumbria County Council and Copeland and Allerdale Borough Councils to halt the Managing Radioactive Wastes Safely process by their withdrawal (4). The MRWS process has one agenda -
“steps towards geological disposal” which means a newly mined area (or two or three) filled with high level radioactive wastes – in a hole(s) bigger than Lake Windermere and as deep as the Eiffel Tower (6).

In November 2008 Cumbria County Councillors were not allowed to vote on what they described as ‘the most important decision this council will ever take.” (7) Copeland and Allerdale were told: “This is the option being taken in the US at Yucca Mountain, Nevada, where highly radioactive fuel will go underground. The Yucca Mountain project involves URS Washington, a key partner in Sellafield's parent body organisation”. (8) Sounds plausible but geological disposal of high level nuclear waste in Yucca Mountain is off the agenda because of contamination risks to that regions water, soil and air. URS Washington have now set up shop in Cumbria, a much wetter area than Nevada (9). Despite the Managing Radioactive Waste Safely Partnership’s reassuring rhetoric, there is in fact nowhere in the world with an operational high level waste geological disposal facility (10).

There are those with concerns about Cumbria’s geology who advocate geological disposal elsewhere (11). We agree that Cumbria is the wrong place but would go further and suggest that there is no place in the world safe, dry and remote enough to put high level nuclear wastes into the
ground and expect them to stay isolated from humans and the environment.

Certainly as far as Cumbria’s geology is concerned It is a massive waste of time, energy and taxpayers money for councils in Cumbria to “express an interest” in “volunteering” to host a high level nuclear waste repository. The Nirex Inquiry Decision was that the site should be sought elsewhere - well away from the Irish Sea. Eminent geologists have recently confirmed that this meant outside West Cumbria: and the Irish Government and others would inevitably lodge legal actions under EU Law to prevent inevitable radioactive pollution of the Irish Sea from a deep underground dump (12).

“Steps towards geological disposal” in Cumbria are being used as a front. The government is desperate to be seen to comply with the findings of the Flowers report that:

There should be no commitment to a large programme of nuclear fission power until it has been demonstrated beyond reasonable doubt that a method
exists to ensure the safe containment of long lived, highly radioactivewaste for the indefinite future. (13)

BNFL (now the NDA) produced a video in 1999 which made a far stronger case against 'geological disposal' in Cumbria than any petitioner such as Radiation Free Lakeland could hope to. The video advises that areas of "high rainfall, permeable rocks and hills and mountains to drive the water flow" would guarantee high level radioactive wastes migrating to the surface (14). In other words geological disposal of high level nuclear
wastes in an area such as Cumbria would make that land too fiercely radioactive to sustain life.

We urge Cumbria County Council, and Allerdale and Copeland Borough Councils to withdraw from the ‘Managing Radioactive Wastes Safely’ process as soon as possible.

NOTE:
*The word ‘Volunteer’ as used in the MRWS process has mutated to: council
volunteering their region to site a high level nuclear waste repository in
return for taxpayer millions.
The dictionary definition of Volunteer is:
• of the volunteer's own free will and without coercion
• for no financial payment
• A person who performs or offers to perform a service voluntarily
• A person who renders aid, performs a service, or assumes an obligation
voluntarily
• without payment in fact or in kind
http://www.thefreedictionary.com/volunteer


(13) As part of its response to the Flowers report, the Government made
the Department of the Environment responsible for radioactive waste
management policy (Command Paper 6820)
http://webcache.googleusercontent.com/search?q=cache:UZhCS7oaV2wJ:www.publications.parliament.uk/pa/ld199899/ldselect/ldsctech/41/4103.htm+Flowers+report+nuclear&cd=4&hl=en&ct=clnk&client=safari&source=www.google.com

Pangea Project Sponsored by BNFL Rules Out Cumbria ie area of “high
rainfall, permeable rocks and hills and mountains to drive the water
flow.”
http://northern-indymedia.org/articles/2115
Posted by marianne birkby at 10:15