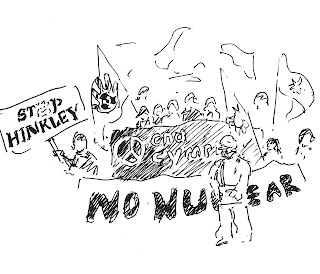 "We can stop new nuclear
The government and the nuclear industry want us to believe that nuclear new-build in Britain is a done deal. They want to discourage us from protesting – the message they want us to swallow is clear: opposition is futile, and we will be going ahead anyway!
However, that couldn't be further from the truth. Yes, the government has introduced a framework which effectively will subsidise new nuclear at our expense – as electricity consumers and taxpayers. Yes, the government has effectively deprived local communities from having a say in the planning process for new nuclear and other major infrastructure projects thus dumping a crucial cornerstone of local democracy.
But nuclear new-build in Britain is already behind schedule and has faced legal and other setbacks. Public concern is mounting following the Fukushima disaster. If we can stop the building at Hinkley, we can stop the whole process. Now is the time to mobilise and take action.
New-nuclear in Britain is far from being a done deal, and we can still stop it!

NEW NUCLEAR — STOP IT AT HINKLEY!

The action:
A non-violent blockade of Hinkley Point nuclear power station in Somerset"