The Biggest Slag Heap in the World 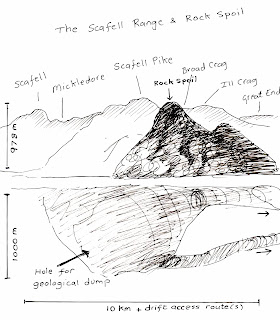 Nominations are already coming in for what this huge slag heap, ripped out of Lakeland geology, could be called:

I have just sent off a new paper to MRWS:Cumbria regarding the
unsuitability of the Eskdale granite as a host rock for a waste
repository, and attach a copy for your attention. It includes some
comments on the volumes of rock spoil to be created and then either
re-used later as backfill and/or taken off-site.

I believe that the letter you received from Mark Gough of NDA, dated
19 May 2011, is misleading on this point. Here are some
calculations, based upon the volumes of 'higher strength' rock spoil
which would be created.

The volume to be removed (if not left in Eskdale) is 6640921 cu. m.
(from ref. [5] of my paper). That is based on the volume of space to
be created underground, and therefore refers to solid rock. This
volume could be stored as a berm 1000 m long by 200 m across and 35
m high. Actually it will be about 50% greater in volume (e.g. 50 m
not 35 m high) because rock spoil is less dense than solid granite.
The NDA clearly can't leave that in Eskdale (along with the
additional rock spoil berms of about half this volume again) to
remain for up to 50 years and then re-used as backfill). NDA will
presumably ship it out - granite cuttings do have a value as
aggregate. But we have to address the road and rail usage of
removing it.

Multiply the volume by the density of solid granite (2.7 tonnes per
cu. m) to get the weight. That makes 17930487 tonnes. A road lorry
has a 44 tonne capacity, so that makes 407511 loads. Spread over 10
years (a maximum figure for the excavation phase), that means 112
loads per day - or a lorryload every 4 minutes during a working day
of 8 hours, every day of the week, for 10 years. The road traffic is
clearly double that because the returning empty lorries have to be
counted as well.

This is completely at odds with the assurances you have been given
by NDA:

"we have assumed that all of the excavated rock spoil could be
stored on the surface and then either re-used in construction and
backfilling, or for landscaping and site restoration. Under this
scenario there would be no requirement to transport rock spoil
off-site."

Please note that similar figures will apply if the host rock is some
other kind of 'higher strength'or 'lower strength' rock. Note that
the evaporite scenario (the third generic host rock type) does not
apply to West Cumbria.

So is CCC going to permit this kind of long-term environmental
damage within the National Park?

I await your comments with interest.