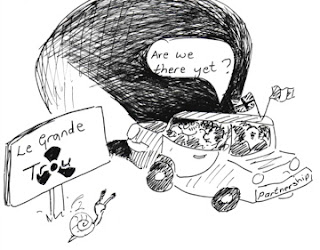 Rather than spending taxpayer’s money on a jolly this week to see France's
research into geological dumping the DECC sponsored Managing Radioactive
Wastes Safely (!) Partnership should go for a walk up Scafell. A walk up
Scafell would give the Partnership a sense of the scale of DECC’s proposal
for a huge hole in the ground. Radiation Free Lakeland would be happy to
organise a day guiding members of the Partnership to the top of Scafell.
We would, of course, avoid the "Bad Step." We could then look down to
get some idea of the depth of the geological dump proposed - 1000 meters.
Scafell is a mere 978 meters.

In looking for a Cumbrian dump for intermediate level nuclear wastes,
Nirex found in the 1990s that the geology of the Lake District leads to
upward waterflows into the aquifer surrounding the mountains. The Inquiry
revealed difficulties in identifying a large volume of rock in West
Cumbria to avoid fast routes for radionuclide escape through watery
fractures and faults. A much larger volume of rock would be needed for the
plan for a dump containing spent nuclear fuel and high level wastes which
being hotter and more volatile must be spaced further apart.

Residents of Bure, France, are "embracing" that underground research
laboratory about as much as Nevada welcomed the now abandoned Yucca
Mountain nuclear dump. Bure's aquifers run through the proposed storage
site. Public opposition to nuclear power in France is rising because of
the waste problem.

Maybe there isn’t enough rock in the world to isolate high level nuclear
waste from humans and the environment into eternity? No where in the world
has done this. Maybe it is more honest to say there is no ‘solution’ and
to just stop producing high level nuclear wastes? Certainly this
Partnership 'process' should be scrapped now before more public money is
spent on “steps towards” a worlds first, high level nuclear waste
geological dump,- located somewhere as yet unspecified (for DECC's sake
don't scare the horses!) in West Cumbria.

http://www.greenpeace.de/fileadmin/gpd/user_upload/themen/atomkraft/GPI_nucl_waste_crisis_in_France_briefing_30may06.pdf
Posted by marianne birkby at 05:24