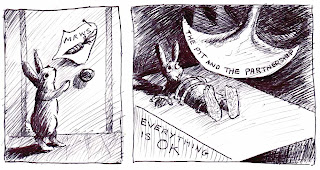 The Scariest Halloween Story is the one where the nasties appear as
respectable types who say “Don’t Worry Everything is OK!” The viewer
has a hunch that there will be an inevitable doom laden slide to a scary
ending.

With nice timing for the scary Halloween season the Managing Radioactive
Wastes Safely Partnership have produced a draft consultation document
which will be used to continue promoting the “steps towards geological
disposal” of high level nuclear wastes in Cumbria’s leaky geology.

The document which will be discussed in Egremont this thursday says:
"We wanted to be ‘confident in the integrity of the BGS (British Geological
Survey) screening
work/report’.
Our initial opinions are:
BGS study. We are confident in the integrity of the BGS screening report
because it has been endorsed by two independent reviewers and there is no
significant criticism of the study’s integrity from elsewhere".
http://www.westcumbriamrws.org.uk/meetings_more.asp?news_id=30

What about the significant criticism from:

Members of the original Committee on Radioactive Waste Management
http://www.nuclearwasteadvisory.co.uk/news-and-events/news/letter-from-corwm-members-on-new-build-waste/

There are many more significant criticisms!

The good news is that unlike the viewer or reader of a scary Halloween
story, Cumbria has the wherewithal to stop the slide into the unfathomable
void.
Posted by marianne birkby at 07:38