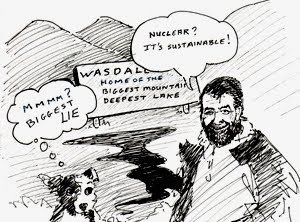 Use no. 10
Radioactive Lakes with Eric Robson - a conversation
Last night I phoned Eric Robson - star of Gardener's Question Time and Chair of Cumbria Tourism. In 2009 Mr Robson was key speaker at a conference called "Lakes for Living- Lakes for Life" where his famously pro nuclear and anti wind energy views were voiced. Recently though I had been impressed with Mr Robson's even handed(ish) chairing of a debate which followed the film screening of a nuclear waste documentary - "Into Eternity." Emboldened by this evenhandedness I thought "why not give old Eric a ring and ask if he will consider supporting the petition to prevent an underground nuke dump here in the Cumbria he loves."
Fat Chance!!
Good old Eric is faithful to the nuclear cause and spent some time trying to make me see the error of my ways with the following trite soundbites and some new spins that I hadn't heard but made my heart sink:
"coal has killed more people than nuclear" "entirely reasonable for the government to look at geological disposal in Cumbria" "the waste will be safely deep underground" "During the film I listened slack jawed at the descriptions of warning markers - who is bothered about people thousands of years from now? " "Wastwater can cope with the water abstraction to cool new wastes" "we need new nuclear build in Cumbria" and so on..
I did manage to make the point that if after over 20 years of deciphering the Rosetta Stone it had said "Do not dig here , do not drink the water, get away from this area it will kill you and your children" then we might have been a tad peeved.
Today I googled Eric Robson and no wonder he not willing to consider the arguments against a deep nuke dump. He is director/founder of PR company Osprey Communications who are being showered with taxpayers money to push the "steps towards geological disposal" agenda of this government. How does that square with being Chair of Cumbria Tourism!!! Better watch out for good old Uncle Eric saying anti nuclear campaigners are the real threat to Cumbria's tourism while nuclear is green and good, sugar and spice and all things nice.
INTO ETERNITY
"Why isn't every government, every philosopher, every theologian, everywhere in the world discussing Onkalo and its implications? I don't know, but they should see this film."
http://www.intoeternitythemovie.com/synopsis/
OSPREY COMMUNICATIONS
Specialists in Crisis PR...
"Their ability to get across a brief very quickly is second to none. They have an excellent grasp of how best to get over a positive message and also how a client should respond to criticisms."
http://www.ospreycommunications.co.uk/more_info.asp?current_id=97
Just a few of the many Radioactive Lakes
Trawsfynydd Lake - Wales
http://www.dailymail.co.uk/news/article-390454/Breast-cancer-rates-higher-near-nuclear-plant.html
Lake Karachai - Ural Mountains
http://www.albionmonitor.com/9807a/karachai.html
The Great Lakes, Canada
http://iicph.org/low-dose-radiation-in-great-lakes-water-systems-a-serious-health-hazard
Columbia River - Oregon
http://earthshare-oregon.org/our-groups/profiles/crk/hanfordupdate/view
Posted by marianne birkby at 11:36