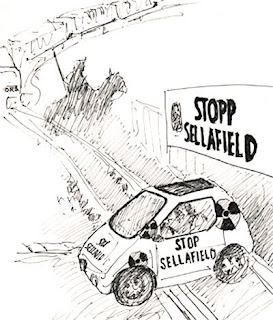 Use 11
Whistleblowers - Neptune Network from Norway
Police today removed Neptune Network's campaigners from the railway line at Sellafield. Why Oh Why are'nt thousands of Cumbrians sat on the railway preventing nuclear wastes from being delivered to Sellafield? Perhaps it is because the intelligentsia have been neutered by The Guardian's George Monbiot. Perhaps it is because Cumbrians think 'why bother - our souls are owned by the company store' - but George isn't Go(o)d and the company store turns out to be paid for by the tax payer. The wastes that Neptune Network are blowing the whistle on, travel to Sellafield from around the world and through "reprocessing" even higher level wastes are added to the growing toxic brew. Norwegian campaigner, Frank Hugo Storelv said "The plant cannot handle the waste they already have in a responsible way and they say themselves that Sellafield cannot accommodate more without creating an untenable security situation. Sellafield stores most of the world's nuclear waste and Norway is under threat from this."
Meanwhile Chair of Cumbria tourism Eric Robson has said that he supports "geological disposal" under Cumbria of this toxic brew because:
"I'm convinced by the scientific arguments that geological disposal rather than burying our heads in the sand is the best way forward. Nuclear waste is with us. We can't wish it away despite the best efforts of some so-called environmentalists. My views are well known and I am elected as chairman of Cumbria Tourism, rather than being self appointed."

Posted by marianne birkby at 07:47