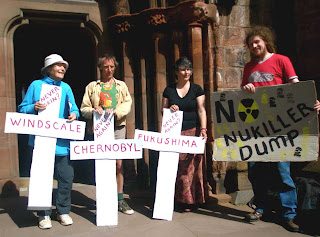 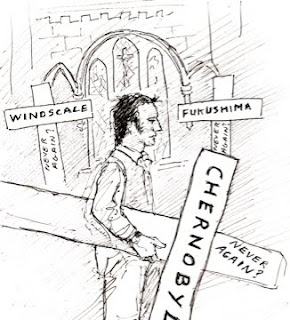 Use 13
Anniversaries
Today is the 25th anniversary of the Chernobyl catastrophe. We went to Carlisle Cathedral to lay three crosses:
Windscale- Never Again? Chernobyl - Never Again? Fukushima- Never Again?
A letter was delivered to the "nuclear is a green option" Bishop of Carlisle...

Congratulations on your appointment as Lead Bishop on health care issues.

Today is the 25th anniversary of the Chernobyl catastrophe. Radiation Free Lakeland and representatives from other concerned groups will be laying three crosses outside Carlisle Cathedral. The crosses will read:

The Diocese is informed by the Churches Together Environment Group which is largely advised by Supporters of Nuclear Energy SONE. “Environment Group” publications reflect this pronuclear bias. We feel that the Diocese could do much more to seriously take on board legitimate concerns about nuclear power. For two hours on the morning of your enthronement in 2009 we spoke to 150 people who had come along specially to sign a letter voicing concerns at the Diocese’s pro nuclear stance. The letter asked:

“Will the Diocese of Carlisle consider listening to independent expert advice

(not from pro nuclear government or industry) on radiation risks of new build and geological disposal before making further pro-nuclear statements?”

Well, the Diocese did kindly agree to hosting a meeting on 6th Feb 2010 We were however surprised that you chose at the meeting to reaffirm a commitment to new nuclear build. The hope was that people would have time to go away and reflect on all the points raised during the presentations. Even local Parish Newsletters present the Diocese’s pronuclear view as “the green route to secure, safe and reliable power” - no dissenting voices get a look in.

In July children from Belarus will be spending a month in the South Lakes to give their damaged immune systems a respite.

The damage will continue through the "children of irradiated parents for as many as seven generations." So "the genetic consequences of the Chernobyl catastrophe will impact hundreds of millions of people."

““In Belarus cancer of the thyroid is so prevalent that the scar left after a thyroid operation is now chillingly referred to as a Belarussian Necklace, thus marking them forever as Chernobyl's victims. Since the disaster there has also been an increase of 800% in the incidence of cancers in children living near to the reactor plus there has been a dramatic increase in the rate of babies born with substantial physical disabilities. Babies born limbless, deformed and with severe brain damage.

There are so many other radiation related health crises occurring in the region that for the first time in Belarussian history , the death rate is HIGHER, than the birth rate”. The South Lakeland branch of Friends of Chernobyl’s Children

Given the ongoing Chernobyl catastrophe and since your enthronement, now Fukushima, will the Diocese of Carlisle withdraw its support for new build and geological disposal?

….. and join us in saying NEVER AGAIN!

On behalf of Radiation Free Lakeland

Sent by email attachment is the document :

Why a deep nuclear waste repository should not be sited in Cumbria: a geological review

Chernobyl: Consequences of the Catastrophe for People and the Environment

Posted by marianne birkby at 12:01